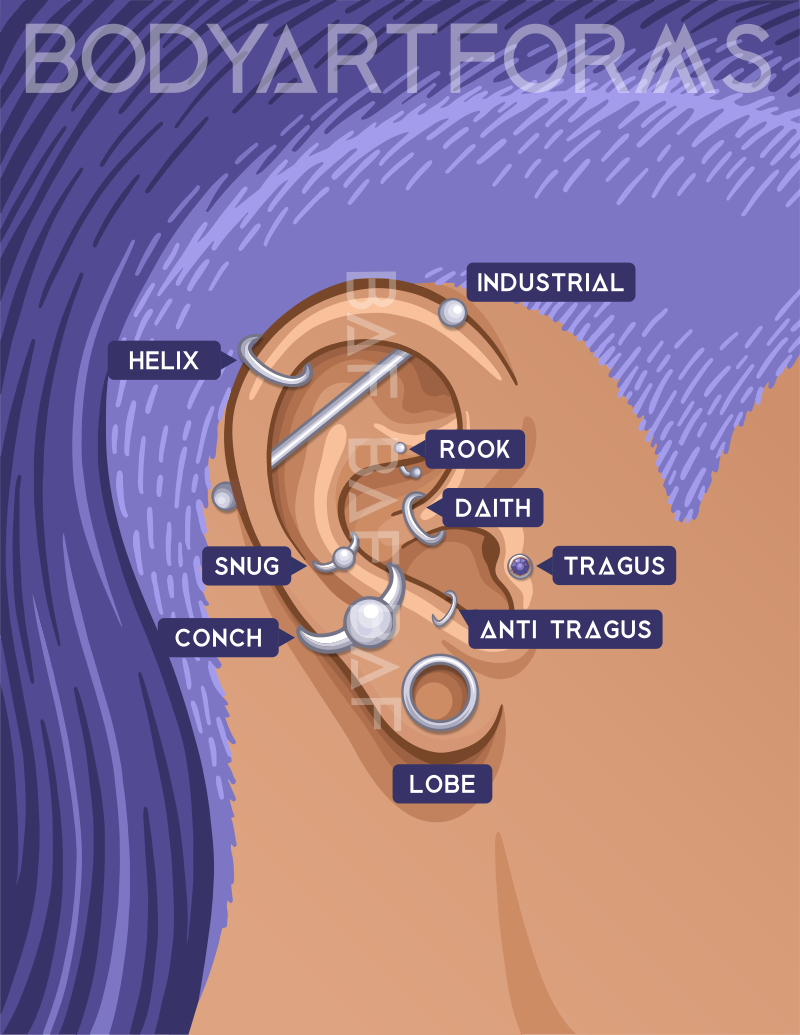 For people with stretched lobes it’s the ultimate nightmare: a torn lobe. It’s something that does happen, and when it does what are the options? Sometimes a piercer can stitch the lobe together again, and sometimes not.

It’s this exact conundrum that piercer Dylan Larsen, owner of Infusion Studio in Marysville, WA, decided to tackle with some engineering and a 3D printer. What he invented is the first prosthetic lobe for people with a lobe tear that either can’t be repaired, or simply as another option for those that want to try it.

I had a chance to chat with Dylan after I stumbled across some pics of his prosthetic online and became fascinated with the concept.

About 5+ years back I started working with 3D printers when Makerbot came out with the Cup Cake 3D printer. The prosthetic Lobe I started to work on close to 3 years ago. It has come a long way from what I started. The first model was really boxy. It needed more curves and depth.  The model you saw posted up was about a year back.

I have had other people come in looking into it, but mainly 2. The first one is a friend that started it all off. Came to me after hitting up a lot of other shops. They said nothing could be done to fix it. It could have been stitched. But I told him about the idea in the prosthetic and he was game. The other was a customer that a bit latter on became my apprentice.

Do you see yourself working on other body modification projects using engineering?
Completely.

Is the person that we see in the photos and video a friend? How did that interaction come about? I.E. Did they come in and ask if there was anything you could do?

Her name is Lisa, and she was a long-time costumer of my shop. My portfolio has a lot of things in it that I have started, and she came across that prosthetic. I told her it would be a fun thing to do.

That seems like an interesting subject to try and throw into a conversation, like, "I think I could make you a prosthetic lobe with 3D printing..."

Asking questions and listening to people makes it really simple to get things rolling into a conversation.  Word of mouth will bring people in to see me about things like that. Body modification is endless. This industry as opened so many doors and windows into other industries or mediums in art and whatnot.

It looks amazing, can it articulate to hold plugs?

The 2 I have worked on will not, but I am going to be starting up a new design that will be lighter in weight, more flexible and should be able to fin plugs/eyelets inside.

From the images I saw, it looked removable at will by removing the jewelry it's connected to. What are the ins and outs of wearing it?

Yes that is very true. As for the ins and outs, I feel it would be like a bead on a barbell so to speak. You can change it out when needed/wanted. Easy to clean. Different shapes for different looks.

It seems like such a cool project. I assume you're getting a lot of feedback as time goes by. Do you hear from a lot of people looking to get a prosthetic themselves?

The feedback has been amazing and I have even had some piercers say they would cut their lobes to get one. [laugh] A few piercers had a lot of hate to say. I should have stitched it up. I could have, but I gave them a choice to make for themselves. We are here to grow and change ourselves. Who doesn't want more options?

What kind of 3D printing tech are you working with?

As far as my tech goes. I am self-taught. I have come a long way, but now looking into CAD schooling. Then I can do so much more.

Looking for more info on Dylan and his prosthetic work? Check out his Instructable and his twitter.